A little over twenty years ago we went backpacking for the first time with our children (teens and tweens). It was a great family time and brought a sense of satisfaction to be able to carry all your needs for a few days on your back and enjoy the time in the outdoors. We continued this tradition for a few years but then decided to move on to other pursuits – horseback trips, white water rafting etc.

In the last few months I have been doing research on hammocks and discovered the wide array of camping hammocks available now. Back when we went it was carry the tent and sleeping bag and, if you were “lucky”, a small foam pad to keep you warm and give a little cushion from the hard ground.  I have many fond memories of the times we spent together but not such fond memories of the actual hike or the sleeping on the hard, rough ground.  (O.K., I’m a bit of a wimp.)

We went with another family who also had children the about same age as ours. We learned to get along with others, to share and to help each other. 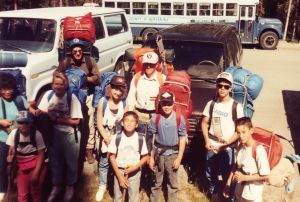 This picture was taken at the start of one of our excursions. Our children learned to love and appreciate the outdoors – although none of them do any backpacking at this time – and they still enjoy camping.

As I learned about the camping hammocks – the ease of set-up, the comfort, the light weight – I began to wish that I could try backpacking again. I’m not really serious about it because, at almost retirement age and not being in great shape (looking at knee replacement in the next year or so) I doubt I could handle it. However, I am envious of the younger generation that have so many options available to them.

I’m quite sure there were hammocks available for camping back when we were doing our outings, but it was something I’d never heard of. I’m also sure that there have been great improvements in the camping hammocks over the past twenty years as well as an increased selection.

Now as I think about camping, I wonder what it would be like to use a hammock instead of a tent and sleeping bag. We have been going on three generation camps for over ten years but have progressed from tenting, to tent trailer to fifth wheel camper.  Maybe it’s time to take a step back to the simpler way?

Our website uses cookies to make your browsing experience better. By using our site you agree to our use of cookies. Learn More I Agree
× What Are Cookies As is common practice with almost all professional websites this site uses cookies, which are tiny files that are downloaded to your computer, to improve your experience. This page describes what information they gather, how we use it and why we sometimes need to store these cookies. We will also share how you can prevent these cookies from being stored however this may downgrade or 'break' certain elements of the sites functionality. For more general information on cookies see the Wikipedia article on HTTP Cookies. How We Use Cookies We use cookies for a variety of reasons detailed below. Unfortunately in most cases there are no industry standard options for disabling cookies without completely disabling the functionality and features they add to this site. It is recommended that you leave on all cookies if you are not sure whether you need them or not in case they are used to provide a service that you use. Disabling Cookies You can prevent the setting of cookies by adjusting the settings on your browser (see your browser Help for how to do this). Be aware that disabling cookies will affect the functionality of this and many other websites that you visit. Disabling cookies will usually result in also disabling certain functionality and features of the this site. Therefore it is recommended that you do not disable cookies. The Cookies We Set
Account related cookies If you create an account with us then we will use cookies for the management of the signup process and general administration. These cookies will usually be deleted when you log out however in some cases they may remain afterwards to remember your site preferences when logged out. Login related cookies We use cookies when you are logged in so that we can remember this fact. This prevents you from having to log in every single time you visit a new page. These cookies are typically removed or cleared when you log out to ensure that you can only access restricted features and areas when logged in. Form related cookies When you submit data to through a form such as those found on contact pages or comment forms cookies may be set to remember your user details for future correspondence. Site preference cookies In order to provide you with a great experience on this site we provide the functionality to set your preferences for how this site runs when you use it. In order to remember your preferences we need to set cookies so that this information can be called whenever you interact with a page is affected by your preferences.
Third Party Cookies In some special cases we also use cookies provided by trusted third parties. The following section details which third party cookies you might encounter through this site.
This site uses Google Analytics which is one of the most widespread and trusted analytics solution on the web for helping us to understand how you use the site and ways that we can improve your experience. These cookies may track things such as how long you spend on the site and the pages that you visit so we can continue to produce engaging content. For more information on Google Analytics cookies, see the official Google Analytics page. We also use social media buttons and/or plugins on this site that allow you to connect with social network in various ways. For these to work, the social networks may set cookies through our site which may be used to enhance your profile on their site, or contribute to other purposes outlined in their respective privacy policies.